After ten years of longing I finally bought a flat screen TV. 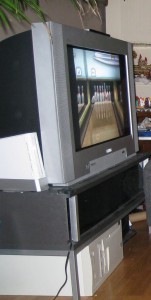 The old fat TV with a "media PC" under it.

I managed to by a new TV just a few years before flat screen TVs became affordable, and since my nice Philips TV kept on working just fine it took me over ten years until I finally bought a new TV. All I needed to do was to choose which TV and convince my wife Cilla that the time had come, a reasonable project for the summer. It turned out that Samsung just had launched a new series of 3D TVs. Since I apparently only buy one TV every ten years I might as well get the latest technology… I thought.

I soon realized that a 3D-TV required a 3D blu-ray player and a 3D capable receiver so the project grew a bit.  Now I needed a TV, a receiver, and a blu-ray player plus some new cables.

This is what our living room looked like a year ago (that is in April 2009).

But wait, I can not have a nice new TV and a 3D capable receiver and a blu-ray player and just have two old Jamo Art speakers from 1988. Hm, I might as well also get five new speakers and a sub-woofer. The project grew some more. Fine, no problem, at least I now knew what I wanted. For the next step I only needed to convince my wife.

I started that part of the project by showing her how nice the new TV looked and how much space we would save compared to the old TV. My wife soon agreed that it was time to get a new TV but demanded that there could be no more cables in the living room. The project suddenly grew. OK so I needed some new hardware and some way of hiding all the cables. After a few weeks of surfing and thinking I decided to build a new wall to hang the TV on and to hide the cables in. The project grew a bit again.

I started sketching the solution and soon realized that my old media player wouldn’t fit, so I decided to upgrade to a mac mini. And what use is a HD TV without HD content? So a new Humax HD PVR system from Comhem was also added to the mix. Now I knew what I needed and after some surfing I knew the dimensions of all pieces and I could start to draw a blue print for the construction. I needed a 20 cm deep wall to fit the speakers in the wall, and I needed room for the TV and for storage of  DVDs and Whiskey. I also wanted to be able to hide all media equipment but still have easy, well relatively easy, access to the connections at the back. I decided on a home built shelf system with a removable side and top.

Now that we where going to redecorate our living room, we might just as well get some new furnitures also, so a new sofa, table, rug, curtains and lamps where added to the shopping list.

The construction could now start.

I started by putting up some placeholders for the TV and speakers. 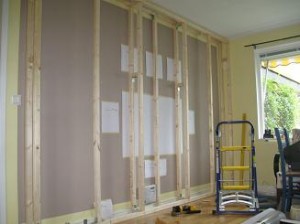 Now the the vertical studs are in place. 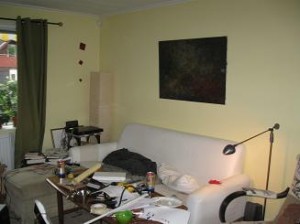 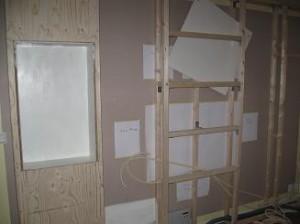 Most studs in place and the first layer of plywood is up. 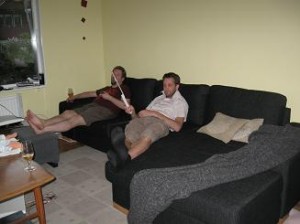 The new sofa arrives and my friend Olle helps me do some planning. 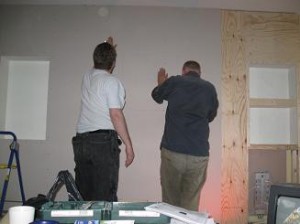 My father in law Lasse gives another helping hand getting the gypsum board in place. (In truth Lasse helped me a lot with the whole project.) In the right hand corner (above the temporary TV) you can see the new surge protecting power outlet. 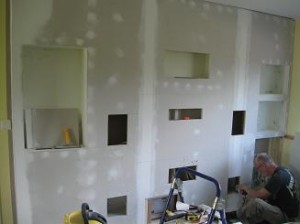 Now all gypsum boards are up and we have taken holes for cupboards and speakers in them. 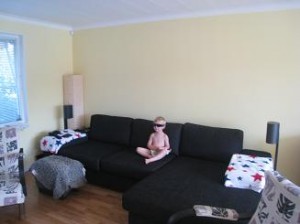 The speakers, the receiver and the TV has finally arrived, Tor is testing 3-D. Cilla has repainted the wall (in the same color as before) with a nice white paint down from the ceiling. 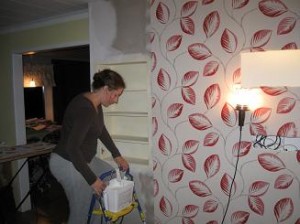 Cilla, with unborn Nils in her belly, is putting up the new wallpaper. 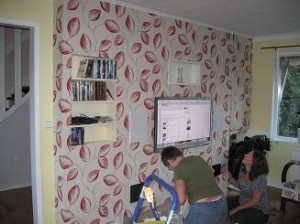 My mother in law is putting some final touches to the wallpapering, hiding the cupboard doors behind a perfect pattern match. Cilla is looking for a new sofa table on the mac mini on the new TV. 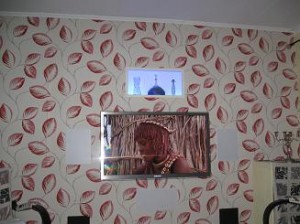 And here is the final result. Almost completely hidden speakers, hidden doors to storage, an alcove with ornaments with lights in adjustable colors.